Others also, who paid worship to the relics of the departed G'mas, erected many thousands of stupas made of gems, gold, silver, or crystal, or built Stupas of emerald, cat's eye , pearls, egregious lapis lazuli, or sapphire;
they have all of them reached enlightenment. And those who erected Stupas from marble, sandal-wood, or eagle-wood ; constructed Stupas from Deodar or a combination of different sorts of timber; And who in gladness of heart built for the Ginas Stupas of bricks or clay; or caused mounds of earth to be raised in forests and wildernesses in dedication to the G'mas;
The little boys even, who in playing erected here and there heaps of sand with the intention of dedicating them as Stupas to the G'mas, they have all of them reached enlightenment.

The Saddharma-pundarika sutra (the lotus of the true law), Ch. 2 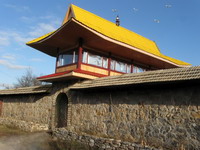 Do you want to accumulate good merits, to make history and to immortalize his name?

Donate for the construction of the first Buddhist monastery in Ukraine - and your name will remain engraved in its walls forever!

"The Spiritual Administration of the Buddhists of Ukraine" (certificate of state registration 315 dated 04/03/1993 issued by State Department for Religious Affairs of the Ministry of Justice of Ukraine) announces the beginning of the termless charity project 'Danapati' ('Donator'): raise funds for the construction and improvement of the first and only one formally acting Buddhist monastery in Ukraine – Sheychen-ling.

Buddhist monastery Sheychen-ling was consecrated in 1993, and it was officially registered as the first Buddhist monastery in Ukraine (certificate of state registration 18 dated March 19, 2003) in 2003. The monastery is situated in 50 km to the south of Donetsk, in p. Olginka of Volnovakha district, covers an area of 1 hectare.

Regular meditation, retreats have been being held since first year of the monastery existing. All comers may participate to them. Sheychen-ling monastery is also a permanent center of traditional medicine, where Tibetan and Chinese medicine drugs are made. Thousands of patients were healed with the help of these drugs since its inception. Sheychen-ling monastery should be a centre of Holy Dharma spreading in Ukraine in the future. It is planned to invite various Buddhist schools teachers and traditions for a long time for a deep and systematic spiritual knowledge transfer.

You will gain good karma. You will forever close the lower worlds doors for yourself and will open wide the gates of the Dharma for yourself and a vast of living beings if you donate money within your powers for construction and improvement of the monastery!

If you DONATE a sum more than $ 10 000, your name will be placed on a gold plate in a main hall of the monastery.

If you DONATE a sum more than $ 1 000, there will be mounted stone plate with your name on it at the monastery in your honor.

If you DONATE a sum more than $ 500, your name will be added to a plate on the wall of the monastery.

If you DONATE smaller amount, your name will still be retained in the list of contributors, stored in a monastery and on this site.

There will also be immortalized the names of all people who participated in the construction of the monastery not for value.

Become danapati - the donator, transferring money to a bank account: